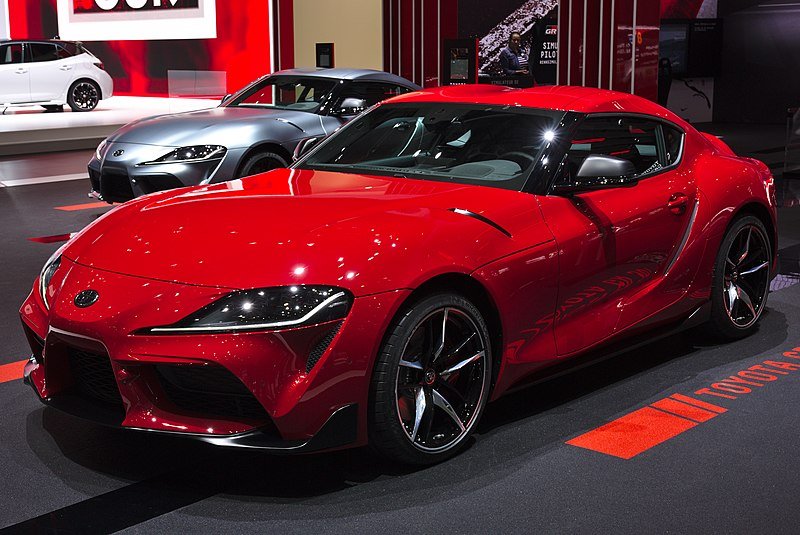 We sure love our sports cars. Apart from their sleek, innovative design, high-performance vehicles offer us the chance to live our life in the fast lane. You can rev up a boring day at the office with the help of a turbo-charged engine snugly fitted into a Toyota Supra GR. Often mistaken for the Toyota Celica, the Supra is alive and well, after taking a backseat for 22 years. Find out more about this iconic luxury sports car from Toyota in the article below.

How Much Is The Toyota Supra?

The Toyota Supra base price starts at C$64990. But you may have to spend more depending on the trim. The low-end luxury sports car has three trims, and these are:

The base trim, the Supra 3.0 is still a car that oozes comfort. The sports seat come in Alcantara trimmings, while the infotainment display is a cool 6.5 inches. Also known as Supra Connect, the infotainment package is eerily similar to the BMW iDrive with the shortcut buttons and rotary dial. Other features include push-button start, satellite radio, heated mirrors, 10-speaker surround sound system, and 14-way power adjustment. The Supra 3.0 is replete with dual-zone climatic control, USB port, and Bluetooth. Car enthusiasts will love the standard safety features on the Supra which includes a rear view camera, lane departure assist, forward-collision warning system, and emergency braking. And you get all this for C$64990.

Besides the base features, the 3.0 Premium comes with heated seats and an HUD. Toyota upgrades the Supra Connect on the Premium with an 8.8-inch display. The audio system has a 12-speaker surround from JBL as well as wireless smartphone charging capabilities.  The Premium Edition starts at C$72,300.

Why the Toyota Supra Was Discontinued

Many a Canadian car lover has pondered this question, and the reason isn’t so far-fetched. After the Asian financial crisis in the mid-’90s, the Supra was no longer appealing to Asian customers who preferred cheaper cars. Stricter regulations in the North American market didn’t help the Supra, and it was finally discontinued because it wasn’t turning any profit. In 2002, Toyota stopped the production of the fourth-generation Toyota Supra MK4.

The Toyota Supra with an in-line Six Cylinder Engine

The Toyota Supra GR is powered by a BMW inline-six with an output of 335 horses churning out 365 lb-ft of torque. You can expect the sports car to hit a top speed close to 250 km per hour. Car enthusiasts with a more hands-on approach won’t enjoy the absence of a manual transmission, but you can rest assured the eight-speed ZF is one of the best automatic transmission today.

How Does the Toyota Supra Handle?

The Toyota Supra GR drifting on the racetrack

If you’ve never driven one of these cars in the past, you’d be forgiven to think it handles like a regular daily driver because of the price. The Toyota Supra GR has a 0-60 time of 4.1 seconds and handles easily even on rough terrain. The feedback from the steering is arguably only bettered by the Porsche 718 Cayman. And considering you can buy two Supras for the price of one 718, it’s a decent bargain. The Supra GR is a drifter’s delight and an absolute missile on a straight line. Newbie drivers will find it easy to drift around the track due to its even weight distribution.

How Is the Toyota Supra Gas Consumption?

One hallmark of the Toyota brand is its economic gas consumption. And despite sporting a BMW power-train, the Supra has a gas mileage you can be proud of. With a fuel tank limit of 13.7 gallons, the Supra is on equal footing with the BMW Z4 while trumping the Mercedes-AMG SLC43. Expect to eke out 24-31 miles per gallon depending on your usage.

How Is the Toyota Supra Interior?

A Japanese Sports Car with a German soul

Although the Toyota Supra old models were known for seating four passengers, the new fifth-generation sports car sits only two. As a two-door coupe, tall Canadians may find it difficult to get into the low-slung Supra GR. But the difficulty in getting inside the sports car gives way to a pleasant surprise at the roomy nature of the cabin. Despite this, the Toyota Supra interior styling has a German feel, and except for the Toyota logo stamped on the steering wheel, you’d be forgiven to think you’re in the cabin of a BMW. Many car lovers won’t see this as a letdown even though the Supra GR needs more Toyota in its DNA.

How Is the Toyota Supra Cargo Space?

The Supra GR 3.0 with Cargo

The Toyota Supra GR delivers more storage compared to its competitors. The benefit of a BMW build allows the car to cram more space than the eyes can see. There are 10.2 cubic feet of space in the trunk, allowing drivers to fit as much luggage as you can on a subcompact sedan. The two-seater interior storage gets you fairly decent door pockets, a storage bin beneath the armrest, as well as two cup holders for your Starbucks latte. When it comes to cargo space, the Supra GR just about edges out the BMW Z4.

What Is the Toyota Supra Dimension?

The Supra GR is only offered as a Coupe

The Japanese sports car with a BMW soul has a longer length and lower clearance than its Z4 cousin at 172.5 inches. It also has a height of 50.9 inches and slightly narrower than the Z4 at 73 inches. The Z4 and the GR share the same wheelbase, coming in at 97.2 inches. As a low-slung sports car, there are just 4.5 inches of ground clearance between the tarmac and the chassis. The advantage of being a two-seater coupe allows it to save weight at 1540kg.

What are the Exterior Colours of The Toyota Supra?

The Toyota Supra GR comes in more colours than you can find on a rainbow. Some of the exterior colours include:

What Is the Toyota Supra Reliability?

A Japanese car in collaboration with a German automobile giant, and assembled at Magna Steyr Austria, the Supra GR has had teething issues. The sports car was first recalled for potential headlights failure, poorly welded seat belt guide loops, and a backup camera that may fail. Buyers shouldn’t be deterred because Toyota provides more than enough warranty for the Toyota Supra with a base warranty of three years or 60,000 km, and a power-train warranty of 5 years or 100,000km whichever comes first.

Is the Toyota Supra Worth Buying?

The Supra GR 3.0 in Nitro Yellow

Well, considering the base price for the Toyota Supra 2020 starts at a reasonable C$65k, it’s worth giving the sports car a try. It is far less costly than the BMW Z4 and shares most of its good features. Apart from minor styling differences, the major distinction between the Supra GR and the Z4 is that you can only purchase the Supra as a fixed-roof two-seater while the BMW Z4 is also available as a fold-down convertible. The rebirth of the Toyota Supra after 22 years is good news for Canadians who want to drive a luxury sports car without paying a luxury price. It is a delicious pleasure to drive, thanks to its throaty and venomous in-line six engine, as well as a precisely tuned suspension. It’s a coupe with the ability to perform as a daily driver as well as the racetrack. Although not as spacious as the 4th generation supra, the two-seater Supra GR is comfortable for two, and has a high-tech infotainment system courtesy of BMW, with more than enough room for everyday cargo. Even better is that you get more miles for your gallon. It will take a grumpy critic to critique this sports car as there isn’t much to complain about apart from the challenge of getting in and out of the vehicle.

The Toyota Supra GR is an absolute bargain to buy, and a joy to drive. It’s everything you hoped for it to be. Bullet fast, relatively cheap, with world class safety features, the Supra GR offers more value for your money compared to its direct competitors. You can visit the Toyota dealership to order yours now.

Cars Safety Features – 10 Models that Get it Right

8 Ways to Childproof Your Car